After this Jesus went to the other side of the Sea of Galilee, also called the Sea of Tiberias. 2A large crowd kept following him, because they saw the signs that he was doing for the sick. 3Jesus went up the mountain and sat down there with his disciples. 4Now the Passover, the festival of the Jews, was near. 5When he looked up and saw a large crowd coming toward him, Jesus said to Philip, “Where are we to buy bread for these people to eat?” 6He said this to test him, for he himself knew what he was going to do. 7Philip answered him, “Six months’ wages would not buy enough bread for each of them to get a little.” 8One of his disciples, Andrew, Simon Peter’s brother, said to him, 9“There is a boy here who has five barley loaves and two fish. But what are they among so many people?” 10Jesus said, “Make the people sit down.” Now there was a great deal of grass in the place; so they sat down, about five thousand in all. 11Then Jesus took the loaves, and when he had given thanks, he distributed them to those who were seated; so also the fish, as much as they wanted. 12When they were satisfied, he told his disciples, “Gather up the fragments left over, so that nothing may be lost.” 13So they gathered them up, and from the fragments of the five barley loaves, left by those who had eaten, they filled twelve baskets. 14When the people saw the sign that he had done, they began to say, “This is indeed the prophet who is to come into the world.” (John 6:1-14). 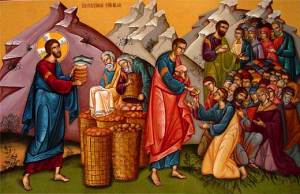 Philip has done the math. He has estimated the number of people in the crowd, how many loaves of bread it would take to feed them, the cost of a loaf of bread, and calculated that “six months’ wages would not buy enough bread for each of them to get a little.” There is not enough to go around.

Andrew concurs, “There is a boy here who has five barley loaves and two fish. But what are they among so many people?” Actually, it is one fish for every 2500 people and one loaf for every 1000 people or, based upon a loaf of bread from our local grocery store,  one slice for about every 45 people. Andrew has done the math and there is just not enough to go around.

It seems that is how we often approach life – by doing the math. We count what is there though we too often focus on what is not there. And pretty soon the reality of our circumstances blinds us to the possibilities of what might be. Our vision becomes narrow and the world small. We are unable to see a way forward, unable to see the Christ in our midst. We see through the lens of scarcity or lack.

As long as we approach life by doing the math, as a problem to be solved, there will never be enough to go around. Jesus was not asking Philip to do the math when he said to him, “Where are we to buy bread for these people to eat?” It was a test. Would Philip look around or would he look within? Would he see with his physical eyes or with the eyes of his heart? Would he focus on what was not there or would he focus on Jesus?

The problem was not a lack of fish and bread but a lack of vision. The abundance of God’s presence is hidden in plain view and often within the illusion of scarcity. Abundance is less a resource to be counted and more an interior quality, a presence, a way of being and seeing.

Everyday we encounter the 5000 – in our self, our friends and families, in our relationships, in our work, in our faith, prayers, and churches, in our challenges, hopes, and dreams…. “Where are we to buy bread for these people to eat?”

4 thoughts on “Doing the Math”