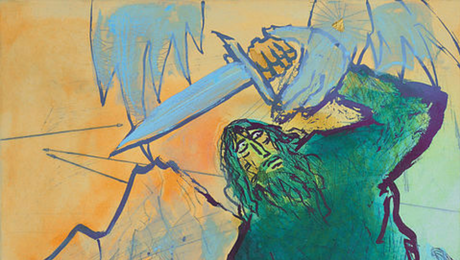 What do you think Sarah would have said if Abraham had told her his plans? Do you think she would have shared his certitude? Picture Abraham coming to Sarah and saying, “Let me tell you what God told me. Isaac and I are gong on a little trip. …” It’s not hard to imagine that she would have had a few things to say to Abraham. What would you have said to him? And why didn’t he tell Sarah his plans? Why didn’t he tell Isaac? Why didn’t he tell the two young men he took with him up the mountain? If Abraham was willing to question, and argue and negotiate with God over the fate of Sodom and Gomorrah why would he not do so for his own son, his only son, whom he loves? What parent here today wouldn’t do that? What parent wouldn’t at least say, “Take me instead?” END_OF_DOCUMENT_TOKEN_TO_BE_REPLACED

Every journey whether physical, emotional, or spiritual begins with leaving something behind. Maybe the reason we feel like we never get anywhere new in life is because we are unwilling to leave anything, much less everything, behind. END_OF_DOCUMENT_TOKEN_TO_BE_REPLACED

Interrupting the Silence by Michael K. Marsh is licensed under a Creative Commons Attribution-NonCommercial-ShareAlike 4.0 International License.
Permissions beyond the scope of this license may be available by contacting Michael K. Marsh.