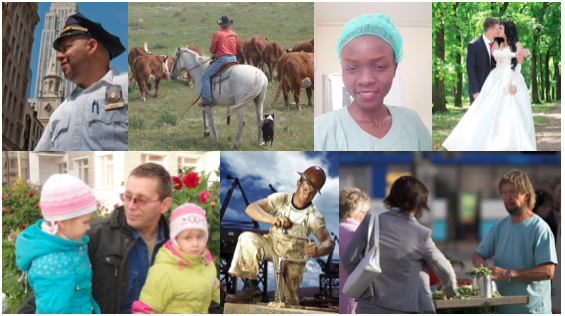 Yes, it’s about the present. It’s about today, the here and now, and the question is this: What then should we do? It’s a significant question for St. Luke. It’s asked three times in today’s reading (Luke 3:7-18), a total of five times throughout the gospel and three more times in the Book of Acts. It’s a question you and I carry with us day by day. It’s one I’ve asked a thousand times. And I suspect have as well.

I remember asking the what-to-do question in my teenage and early adult years as I thought about and made decisions. I asked it during my separation and after my divorce. I asked it after our son Brandon died. I’ve asked it after I said or did something that hurt another. I’ve asked it when I felt lost, overwhelmed, powerless, scared, or guilty. I’ve asked it when the pain of the world is palpable, when those I love and care about are hurting, when others are dealing with the hardships and the difficulty of life. What then should I do? Who and how do I want to be in this moment?

Does any of that sound familiar in your life? When have you asked the question? And what was going on?

That question is about more than just making a choice or deciding between an array of options. The thread that runs through all those circumstances I just described is that there was something of me and my life that had been lost or was at stake. It was ultimately about who I was and who I was becoming.

What then should we do?

By now most of you know me well enough that you won’t be surprised when I tell you I don’t think there is an answer to that question. There are answers, lots of them. There are as many answers as there are situations and people who ask the question. In today’s gospel (Luke 3:7-18), for example, the same question is asked three times and John gives three different responses.

He tells the crowds to share their extra coats and food. He tells the tax collectors to not collect more than the prescribed amount. He tells the soldiers to not use threats and false accusations to extort money.

The what-to-do question is unique to each one of us and the particular circumstances of our lives. There is no one particular answer and the question is never answered once and for all. It’s a question that remains with us throughout our lives. It’s the kind of question that calls us forward. It is an opening to the future. So we might want to hold lightly whatever answer we have. You see, the question remains but the answers change. And if your answer today is the same as it was a year ago, five years ago, twenty years ago, you might want to take another look at your life.

And besides all that I don’t think the question about what to do is even primarily about getting information, finding the right answer, or fixing the situation. I think it’s more about us and reclaiming ourselves than it is addressing the circumstances. That seems to be John’s approach in today’s gospel.

The crowds ask him, “What then should we do?” The tax collectors ask the same question and so do the soldiers. You know what strikes me? Just how unoriginal and ordinary is John’s answer. He doesn’t tell them or us anything they or we have not already heard or did not already know. He tells them to share, be honest and fair, don’t be a bully. That’s pretty ordinary and everyday stuff. It’s what we were taught as little kids.

And maybe that’s the point. It sounds to me as if John is saying that ordinary and routine life like feeding and clothing others, tax collecting, and soldiering are spiritual practices. He did not tell the soldiers to join the Salvation Army or the tax collectors to get jobs as social workers. And he did not tell the crowds to organize an outreach program or go on a mission trip. Instead, John sends them home to live their lives. Repentance and faithfulness happen in our everyday lives, not apart from them. We are not asked to become something we are not but to reclaim and become more fully who and what we are. Be a caring neighbor. Be a fair tax collector. Be an honorable soldier. John’s answers are simple, concrete, practical.

Ordinary life is our primary spiritual practice. Ordinary life is the place we rediscover and reclaim ourselves. Look at the ordinary and every day circumstances of your life. What do you see? What relationships do you have? Who are the people in your life?

Are you a parent, a child, a spouse, a friend? Are you a rancher, a framer, a cook, a teacher, a bookkeeper? Are you a secretary, a carpenter, a salesperson, a lawyer, a medical professional? Are you a student, a politician, a police officer, a retired person, an unemployed person? What do you imagine John saying to you?

What then should you do? What would it look like to reclaim yourself in this moment and in the current situation of your life?