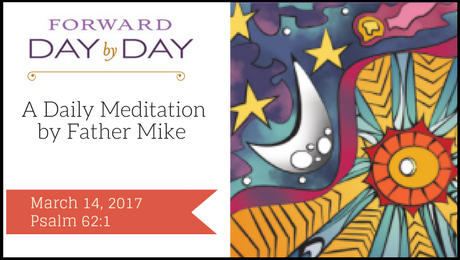 Psalm 62:1. “For God alone my soul in silence waits; from him comes my salvation.”

One Sunday, years ago, I knelt to pray before the liturgy began, as was my usual practice. I always had something to tell or ask God. This day, however, was different. I had no words. It wasn’t that I had nothing to say—I simply lacked words capable of expressing what was within me. After several failed attempts to say something to God, I was left waiting in silence.

In that stillness, I faced my own powerlessness and felt my needs more acutely. There was nothing I could say or do—I had reached the limits of my own self-sufficiency and discovered the starting place of prayer. Prayer begins when the words end.

The silence I felt that morning was not so much about the absence of my words as it was about God being present to me. The silence created a space and a place for God and me to both show up—an interior sanctuary of intimacy and vulnerability.

The words were gone; I had nothing to offer but myself. The silence revealed me to myself and held me before God. I was the expression of my prayer, and God was the response.

*Originally written for and published by Forward Day by Day.