The collect and readings for the Fourth Sunday in Lent may be found here. The appointed gospel is John 9:1-41.

As he walked along, he saw a man blind from birth. His disciples asked him, “Rabbi, who sinned, this man or his parents, that he was born blind?” Jesus answered, “Neither this man nor his parents sinned; he was born blind so that God’s works might be revealed in him. We must work the works of him who sent me while it is day; night is coming when no one can work. As long as I am in the world, I am the light of the world.” When he had said this, he spat on the ground and made mud with the saliva and spread the mud on the man’s eyes, saying to him, “Go, wash in the pool of Siloam” (which means Sent). Then he went and washed and came back able to see.

The neighbors and those who had seen him before as a beggar began to ask, “Is this not the man who used to sit and beg?” Some were saying, “It is he.” Others were saying, “No, but it is someone like him.” He kept saying, “I am the man.” But they kept asking him, “Then how were your eyes opened?” He answered, “The man called Jesus made mud, spread it on my eyes, and said to me, ‘Go to Siloam and wash.’ Then I went and washed and received my sight.” They said to him, “Where is he?” He said, “I do not know.”

They brought to the Pharisees the man who had formerly been blind. Now it was a sabbath day when Jesus made the mud and opened his eyes. Then the Pharisees also began to ask him how he had received his sight. He said to them, “He put mud on my eyes. Then I washed, and now I see.” Some of the Pharisees said, “This man is not from God, for he does not observe the sabbath.” But others said, “How can a man who is a sinner perform such signs?” And they were divided. So they said again to the blind man, “What do you say about him? It was your eyes he opened.” He said, “He is a prophet.” The Jews did not believe that he had been blind and had received his sight until they called the parents of the man who had received his sight and asked them, “Is this your son, who you say was born blind? How then does he now see?” His parents answered, “We know that this is our son, and that he was born blind; but we do not know how it is that now he sees, nor do we know who opened his eyes. Ask him; he is of age. He will speak for himself.” His parents said this because they were afraid of the Jews; for the Jews had already agreed that anyone who confessed Jesus to be the Messiah would be put out of the synagogue. Therefore his parents said, “He is of age; ask him.” So for the second time they called the man who had been blind, and they said to him, “Give glory to God! We know that this man is a sinner.” He answered, “I do not know whether he is a sinner. One thing I do know, that though I was blind, now I see.” They said to him, “What did he do to you? How did he open your eyes?” He answered them, “I have told you already, and you would not listen. Why do you want to hear it again? Do you also want to become his disciples?” Then they reviled him, saying, “You are his disciple, but we are disciples of Moses. We know that God has spoken to Moses, but as for this man, we do not know where he comes from.” The man answered, “Here is an astonishing thing! You do not know where he comes from, and yet he opened my eyes. We know that God does not listen to sinners, but he does listen to one who worships him and obeys his will. Never since the world began has it been heard that anyone opened the eyes of a person born blind. If this man were not from God, he could do nothing.” They answered him, “You were born entirely in sins, and are you trying to teach us?” And they drove him out.

Jesus heard that they had driven him out, and when he found him, he said, “Do you believe in the Son of Man?” He answered, “And who is he, sir? Tell me, so that I may believe in him.” Jesus said to him, “You have seen him, and the one speaking with you is he.” He said, “Lord, I believe.” And he worshiped him.

Jesus said, “I came into this world for judgment so that those who do not see may see, and those who do see may become blind.” Some of the Pharisees near him heard this and said to him, “Surely we are not blind, are we?” Jesus said to them, “If you were blind, you would not have sin. But now that you say, ‘We see,’ your sin remains. 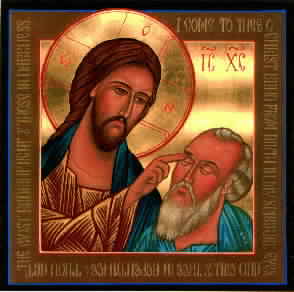 They all looked at him but they never saw him. He was the blind guy. Born that way. Day after day he sat and begged. They looked. They walked by. They wondered. But they never saw. He had never seen their faces until today. He had never seen his own face, his parents’ faces, a sunrise, the stars, his home, a smile until today. Before today it was as if he didn’t even exist. He was a life waiting to be born, a light waiting to shine, a word waiting to be spoken. Today he became a new creation, he was enlightened, he became a living testimony to the Son of Man but they still don’t see him. For some reason they are unable to see him.

The disciples look at him and see a theological question, “Rabbi, who sinned, this man or his parents, that he was born blind?” Their vision is distorted by the popular belief that suffering is caused by sin and you get what you deserve.

The neighbors looked but couldn’t see past the image of the way things had always been, a blind man sitting and begging. It’s all he had ever known. It’s all they had ever known. Blinded by disbelief they keep asking him, “How were your eyes opened?”

Two times the religious leaders call him in. Two times they interrogate him. Two times he gives glory to God. They cannot see the prophet, the man from God, that this formerly blind man now sees. They cannot see the new life, the new man, the new creation that bears testimony to the man from God. Two times they turn a blind eye to this man and his God. No one, as the saying goes, is more blind than he or she who chooses not to see. They have chosen power, rules, and boundaries over the truth and their eyes have grown dim.

Even this man’s own parents distance themselves from him. They can talk about their blind son but not about their seeing son. To see him, the enlightened son, meant they would have to tell the story. “We do not know how it is that now he sees, nor do we know who opened his eyes. Ask him; he is of age. He will speak for himself.” They deny what is right before their eyes. Fear does that. Fear keeps us from seeing a larger reality, from living with a larger vision. So we live with tunnel vision only seeing that one thing that we most fear.

They all looked but none saw him. If they saw him they would have to confront their own blindness. This man blind from birth is not just a single individual, he is every man, every woman. The only difference between him and all the others in today’s gospel is that he knows he is blind. Until we know we are blind we can never see with new eyes. “Surely we are not blind, are we?”

Blindness is not about the quality of our vision or the condition of our eyes. It is not about the darkness around us but, rather, the darkness within us. How we see others, what we see in the world, the way we see life is less about the objects of our seeing and more about ourselves. We do not see God, people, things, or circumstances as they are but as we are. Until our eyes are opened by Christ our seeing is really just a projection of ourselves onto the world. What we see and how we see manifest our inner world. They describe and point to the fears, attachments, and beliefs within us.

If we wish to see God, life, and others as they really are then we must attend to what is going on within us. True seeing begins in the heart not the eyes. We must begin to acknowledge the fears, attachments, and beliefs that live within us and how they have impaired our vision.

Think about a time when you were scared, really scared. Maybe it was about your marriage, your job, the illness of loved one. That fear had a way of blinding you. Fear rivets our attention on that thing we fear to the exclusion of everything else around us. That one thing is all we can think about, all that we can see. Fear narrows our world view and our vision becomes myopic, nearsighted to the point of exclusion.

Attachments are those things or people we think we must have to be happy. We can’t imagine life without them. We have convinced ourselves that our very existence in some way depends on them. The Bible calls them idols. Modern society calls them addictions. Regardless, we will inevitably look for and see only that which fosters and affirms our attachments and will turn a blind eye toward anything that threatens them. Our vision becomes selective.

We have probably all met someone who is so fanatical in his or her beliefs that he or she cannot see another point of view. He cannot look at any other possibility. She refuses to see other ways but her own. Not only have we met these people too often we are these people. We all have certain beliefs to which we cling. They offer the illusion of stability and security. So we no longer live in the real world, God’s world, but a world that we have created in our head.

The inner darkness of our fears, attachments, and beliefs is what keeps us from seeing. They cover our eyes like the mud on the eyes of the man born blind. In placing mud on the blind man’s eyes Jesus is holding before him the reality of his blindness. He wears thick black lenses of fear, attachments, and beliefs. We all do. Those who know this are sent to wash in the pool, to be re-created, and to see with new eyes. Once they were darkness but now in the Lord they are light. The rest will continue looking but never see, their faces caked with mud.