The collect and readings for today, the Twenty-second Sunday After Pentecost, Proper 25C, may be found here. The appointed gospel is Luke 18:9-14.

He also told this parable to some who trusted in themselves that they were righteous and regarded others with contempt: “Two men went up to the temple to pray, one a Pharisee and the other a tax collector. The Pharisee, standing by himself, was praying thus, ‘God, I thank you that I am not like other people: thieves, rogues, adulterers, or even like this tax collector. I fast twice a week; I give a tenth of all my income.’ But the tax collector, standing far off, would not even look up to heaven, but was beating his breast and saying, ‘God, be merciful to me, a sinner!’ I tell you, this man went down to his home justified rather than the other; for all who exalt themselves will be humbled, but all who humble themselves will be exalted.” 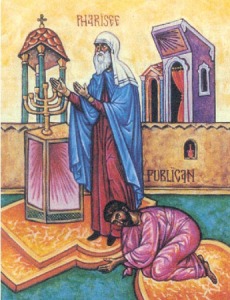 God, I thank you that I am not like…. Now fill in the blank with whatever it might be for you. You may not pray like the Pharisee but have you ever expressed those kind of opinions in conversation? Have you ever kept those thoughts to yourself in silent self-righteousness?

The one thing we cannot in all honesty say is, “God, I thank you that I am not like the Pharisee.” And if we do say that then our own words become evidence that that is who we are. But that is not who we want to be. We want to be the justified tax collector because we have come to believe that Pharisees are narrow, legalistic hypocrites. To hold that belief sort of sounds like the Pharisee, doesn’t it?

When I listen to the Pharisee’s prayer, when I recall conversations of a similar tone, when I acknowledge those have sometimes been my own thoughts I can’t help but wonder what is really going on here. It is one of those “me thinks thou dost protest too much” kind of moments. What are we hiding? What’s underneath all that, “Look at me, look at what I do, what I have and who I am not like?” Who is the Pharisee trying to convince? God or himself? His prayer is directed not so much to God but to himself. He is not describing his faith or spiritual practices. He is keeping score.

Anytime we begin keeping score of our own life or the life of another we need to know that something deeper is going on. Score keeping is the way we either deny or try to overcome the feeling of emptiness, the loss of meaning, the brokenness of our life. It is a symptom that we are standing in the place of death. We use it to deny death, to escape, as a way of convincing ourselves that we are okay and our life is fine.

That’s what the Pharisee is doing. “I am not a crook, a rogue, or a womanizer. I do not extort money like this tax collector. I not only follow the law I exceed its requirements. I am a good faithful Jew.” He probably was. I do not doubt that what he says is true.

This parable is not about the bad Pharisee and the good tax collector. The people of Jesus’ day would have seen it as just the opposite. Pharisees were respected, educated, pious, faithful and holy. They did what was right. The tax collector, however, was the worst kind of a crook, a legal one. He colluded with the Roman Empire to extort money from his own people. He was a bad guy, despised and feared.

To know we are dead is the beginning of resurrection. Scorekeeping blinds us to our own death. This parable is the invitation to stop keeping score, to acknowledge and hold before God the dead places of our life: the failures and disappointments; the break ups and break downs; the emptiness, sufferings, addictions; the places of our life where we no longer dream dreams, have visions, or prophesy. That is what the tax collector did.

The tax collector went home justified, not because he was good or better than the Pharisee, he wasn’t, but because he offered God a dead life not a scorecard. God did not withhold anything from the Pharisee. God simply gave him what he asked for, nothing. For the tax collector God’s mercy has opened the door to a new life, a new world, a new self-understanding, a new relationship with God. We don’t know what happened after he got home but we know this. A choice now lay before him, the choice to walk into his own resurrection. That does not tell us how the story ends. It tells us, rather, how it might begin.