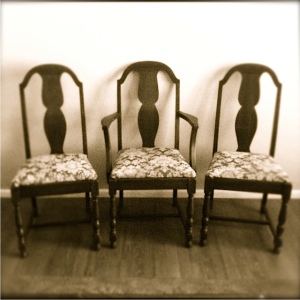 James and John are looking for the best seat in the house. They want to sit next to Jesus, in his glory, one on his right and one on his left. That seat, however, is only for those for whom it has been prepared.

James and John sound a bit arrogant and self-seeking; interested in privilege, honor, and status. That’s often how this text is interpreted. There is certainly no lack of that kind of behavior in our world. We’ve all seen it in others and, if we are honest, in ourselves as well. Maybe the usual interpretation and judgment are more a statement about our own motives than that of James and John. Maybe that’s why the other ten are so upset. Maybe, however, there is more to this story than the usual interpretation. Maybe there is another way to understand what is going on not only in the text but with us.

We all have those people in our lives that attract and draw us to them. Their lives speak to us of love and friendship. They show us something about ourselves. Their presence changes who we are. They call from us the best part of who we are. In them we catch a glimpse of something holy, something meaningful, something that gives life. We want to get as close as we can. We don’t want to let it slip away. We want to be next to them not because of who we are but because of who they are. That is what Christ offers each one of us.

That is what James and John have experienced with Jesus. It began that day at the Sea of Galilee. They caught a glimpse of something in and about Jesus that allowed them to leave their boat, their nets, and their dad. They along with Peter would become the inner circle of Jesus’ disciples. They were the ones permitted to see Jairus’ daughter restored to life. They were the ones Jesus took up on the mountain to witness his transfiguration. They have seen things the others did not. They were invited in when the others were not.

All along the way James and John have had a different experience of and relationship with Jesus. They have seen in Jesus something no one else could show them. How could they now not ask to sit next to him in his glory? They are not asking for their own glory but Jesus’ glory. They are only asking for what they have already caught a glimpse of. They do not want to lose the life they have experienced with Christ.

There are moments like that for us as well. They are the times when we absolutely get it. We know that we know. We have glimpsed the beauty, presence, and holiness of Christ in our own life. Everything about our life and world is different. Those are the moments we say, “Grant us to sit at your side, in your glory.” It is not a plea for privilege and entitlement. It is the plea of one who never wants to lose that glimpse, who never wants the moment to end.

Ultimately, that is the moment of decision. Are we willing to drink the cup that Jesus drinks? Are we willing to be baptized with the baptism with which he is baptized? With those questions Jesus is drawing James and John deeper into their own experience of him. He is both affirming and holding them accountable for what they ask. One does not share in Christ’s glory if one does not share in his life, suffering, and death. Glory is not a thing to be had, grasped, or possessed. It is lived. It is not an escape from the world but a deeper engagement of the world. To all this James and John say, “We are able.”

There are times when the darkness is thick and the desperation is deep. Our world is turned upside down. We’ve lost our place. We sit all by ourselves. We not only do not know what we believe about God, sometimes we don’t know if we even believe in God. It’s easy in those times to be angry with and jealous of those who seem to get it. Why them? Why not us?

Jesus does not allow the ten to sit by themselves. He calls them. He permits no separation between the ten and James and John. Regardless of where they are on the journey, their experiences, questions, or struggles they are to walk the same path. They are all to be servants of one another and slaves of all. They now stand as one body of disciples. They walk one path. They follow one Lord. There’s something profound and hopeful about that. Taken together the twelve represent and describe our lives, our faith, and our experience.

We are the ten and we are James and John. Sometimes we catch the glimpse. Other times we can only long to catch that glimpse. Both are a part of the journey. Both are expressions of faithfulness. Both are given the life of Christ. Both can become “those for whom it has been prepared.”

The above sermon is based on Mark 10:35-45, Proper 24B. The collect and readings for the day may be found here. I am grateful to my friend and teacher, David, and our conversation from which this sermon arose.

9 thoughts on “The Seat of Arrogance or the Heart’s Desire?”