The following article was originally written for Reflections Online and published by the Episcopal Diocese of West Texas. It is the second in a series on the Nicene Creed. Part 1 may be found here. 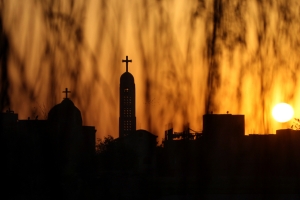 The earliest creedal statements were short professions of faith, often reflected local concerns, and were not necessarily concerned with uniformity of expression. Within the various statements, however, points of agreement were grounded in the Jesus story. Perhaps, the earliest statement is, “Jesus is Lord.” By the end of the second century such statements were steadily moving toward an increasingly standard expression of the faith.

However, the creeds were never intended to be exclusive or exhaustive doctrinal statements. They are, rather, a concise, formal, and authorized statement of basic beliefs about God. They do not offer details of Jesus’ life, teachings, or miracles. They respond to bigger questions. Who is Jesus? How did he enter this world? How did he leave this world? The creeds point us to the gospels for more details. The creeds simply state a truth rather than explaining the details of that truth. They state what is rather than how it is. The “how it is” is experienced in living the creeds, in putting our faith into action.

Thus, the creeds originally began as simple formulas of belief spoken by those about to be baptized. The Apostles’ Creed originated from a set of questions asked of baptismal candidates at Rome near the end of the second century. Its current form was set by the eighth century. Likewise, the Nicene Creed is thought to have been based on the earlier baptismal creed of Jerusalem. These earliest baptismal creeds were an individual’s profession of belief, hence, “I believe.”

As conflicting views about Jesus became more prominent the creeds became more formal and seen as the standard of correct belief. This is especially true of the Nicene Creed which arose out of a church wide gathering held in Nicaea (northwest Turkey) in 325. This was the first ecumenical council. Remember, there were no denominations at this time. There was just the Chruch. In some sense the statements of belief in the Nicene Creed are answers or responses to questions and conflicts within the Church. The Nicene Creed as it was expanded and revised at subsequent councils (Constantinople in 381 and Chalcedon in 451) represents the Church’s statement of beliefs, hence, “We believe.” The Nicene Creed was first used in the Eucharist in the fifth century at Antioch. That use later spread to the western church.

Whether it is “I believe” or “we believe,” believing is more than just intellectual understanding or assent. The Latin and Greek words that are translated as “believe” also convey a sense of trust, entrusting, and commitment. At a deeper level they are saying that we are giving ourselves to God. Grammatically, they are verbs that suggest an ongoing present action. A more literal translation from the original languages might be, “I am believing in One God” or “We are believing in one God.”

Jesus said, “This is the work of God, that you believe in him whom he has sent” (John 6:29). Believing, then, is our life’s work and the creeds describe that work.