As I reflect on a life of abandonment I remember Blessed Charles de Foucauld and his prayer of abandonment. This prayer was composed in November 1897 while on retreat in Nazareth.

Father, I put myself in your hands; Father I abandon myself to you, I entrust myself to you. Father do with me as it pleases you. Whatever you do with me, I will thank you for it. Giving thanks for anything I am ready for anything, I accept anything, give thanks for anything. As long as your will, my God, is done in me, as long as your will is done in all your creatures, in all your children, in all those your heart loves, I ask for nothing else, O God. I put my soul into your hands. I give it to you, O God, with all the love of my heart, because I love you, and because my love requires me to give myself. I put myself unreservedly in your hands. I put myself in your hands with infinite confidence, because you are my Father. 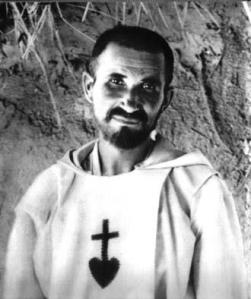 Charles de Foucauld was born in Strasbourg on September 15, 1858. He grew up in an aristocratic family. He served as a French army officer in Algeria but left the army in 1882 and went as an explorer to Morocco.

In 1890 he joined the Trappist order, but left in 1897 to follow an as yet undefined religious vocation. He was ordained to the priesthood in 1901. Thereafter he left for the Sahara, living at first in Beni Abbès and later at Tamanrasset among the Tuaregs of the Hoggar. He wanted to be among those who were, “the furthest removed, the most abandoned.” He wanted all who drew close to him to find in him a brother, “a universal brother.” In a great respect for the culture and faith of those among whom he lived, his desire was to “shout the Gospel with his life”. “I would like to be sufficiently good that people would say, “If such is the servant, what must the Master be like?”

He wanted to establish a new religious order and wrote several rules for this religious life. This new order, the Little Brothers of Jesus, however, would not become a reality until after his death.

Charles de Foucauld was shot to death by rebels December 1, 1916. He was beatified by Pope Benedict XVI on November 13, 2005 and is considered a martyr of the Roman Catholic Church.